Browse Wild N Happy’s incredible range of Morocco guided tours. From 3 days in Marrakech to a 14-day Toubkal and Southern Morocco tour, we have short and epic Moroccan tour packages to suit everyone! Morocco is a country like no other, with hundreds of miles of Sahara desert and a huge coastline on the Atlantic, and a fascinating mixture of African, Arabic, and European cultures. Explore the Morocco tours below to find your ideal adventure, and please get in touch if you have any questions whatsoever. So, what are you waiting for? Start planning the Morocco vacation you’ve always dreamed of!

Fall in love with the splendour of Marrakech on our 3 day experience that explores stunning palaces, bustling souks and
3 days
Morocco

Want to climb one of the great mountains? Well now is your chance with a wondrous 4 day experience that
4 days
Morocco

Embrace the real Morocco with the perfect combination of activities, cultural and ecological wonders exploring the vibrant Red City of
10 days
Morocco

Want to experience something unique? Look no further as we have the perfect Moroccan ingredients to create the most spectacular
8 Days
Morocco

Experience the wonder and magic of Morocco as we take you on a spectacular tour exploring mountainous regions, the Sahara
14 days
Morocco

Explore the famous medina which is full of bustling markets

Fall in love with the splendour of
3 days
Morocco

Want to climb one of the great
4 days
Morocco

Embrace the real Morocco with the perfect
10 days
Morocco

There are approximately 36 million people living in Morocco.

The capital city of Morocco is Rabat.

The largest city in Morocco is Casablanca.

Dirham is the official currency of Morocco.

Football is the most popular sport in Morocco

The most well known Moroccan food is couscous

The national animal of Morocco are Barbary Lions

The written history of Morocco began about 1,000 BCE when people called the Phoenicians from what is now Lebanon sailed there. The Phoenicians were great traders and they founded trading posts in Morocco. They founded the city of Carthage in what is now Tunisia. The city soon became the dominant power in the region. Meanwhile by about 400 BC the native Berber tribesmen formed the kingdom of Mauritania.

In 146 BC the Romans conquered Carthage leading to the growth of  their influence in North Africa. Finally in 42 CE the Romans annexed the kingdom of Mauretania. Morocco remained under Roman rule until the 5th century AD.

In 681 the Arabs began raiding Morocco and by 705 they were in control. The Arabs introduced Islam to Morocco and in 711 they invaded Spain. They soon conquered most of it. However Morocco soon broke up into a number of different kingdoms. In 789 a man named Idriss founded a small kingdom and his son Idriss II made Fes the capital. In the following centuries Fes became a centre of culture.

In the 11th century Berbers called the Almoravids from what is now Mauritania advanced north and conquered Morocco. In the 12th century a people called Almohads rebelled against the Almoravids and they founded a new dynasty. Under the Almoravids Moroccan culture flourished. However in the 13th century the Almohads lost most of the Muslim territory in Spain meaning only Grenada remained.

Furthermore in the year 1248 people called the Merinids began to overthrow the Almohads although it was not until 1269 that they captured Marrakech and brought the old dynasty to an end. Then the same cycle followed. The Merinids eventually declined and they were overthrown. The next Berber dynasty was called the Wattasids. They began to seize power in 1240 and they ruled all of Morocco by 1469.

The next Moroccan dynasty was of Arab origin. The Saadians captured Marrakech in 1525 and Fes in 1548. The Saadian dynasty reached a peak during the years 1578-1603 in the time of Ahmed el-Mansour, known as the Golden One. However after his death the dynasty declined.

Moulay Rachid 1664-1672 founded a new dynasty, the Alaouites. Under Moulay Ismail 1672-1727 Morocco was a strong, centralized state. During the 19th century Morocco remained an independent country.

However in 1912 Morocco was forced to become a French protectorate. Naturally the Moroccans resented their loss of independence and the whole country was not subdued until 1934.Iin 1942, during World War II the allies landed in Morocco and Roosevelt was sympathetic to the Moroccans. In 1944 a Manifesto of Independence was published and in 1947 the Sultan declared he was in favor of independence. In 1953 the French deposed the Sultan but he returned in 1956. Morocco became independent in 1956.

At Wild N Happy Travel, we recognize our duty towards providing Responsible Travel experiences ‘that create better places for people to live in, better places to visit and promote better educational opportunities’.

We equally understand that great product ideas may not always be the most appropriate form of local economic development. Therefore, before launching any of our tourism products we make sure that they adhere to our strict principles on Responsible Travel that include respecting local natural resources, cultural heritage, and human values. We encourage our clients to be aware of their environmental, social and economic impact too. 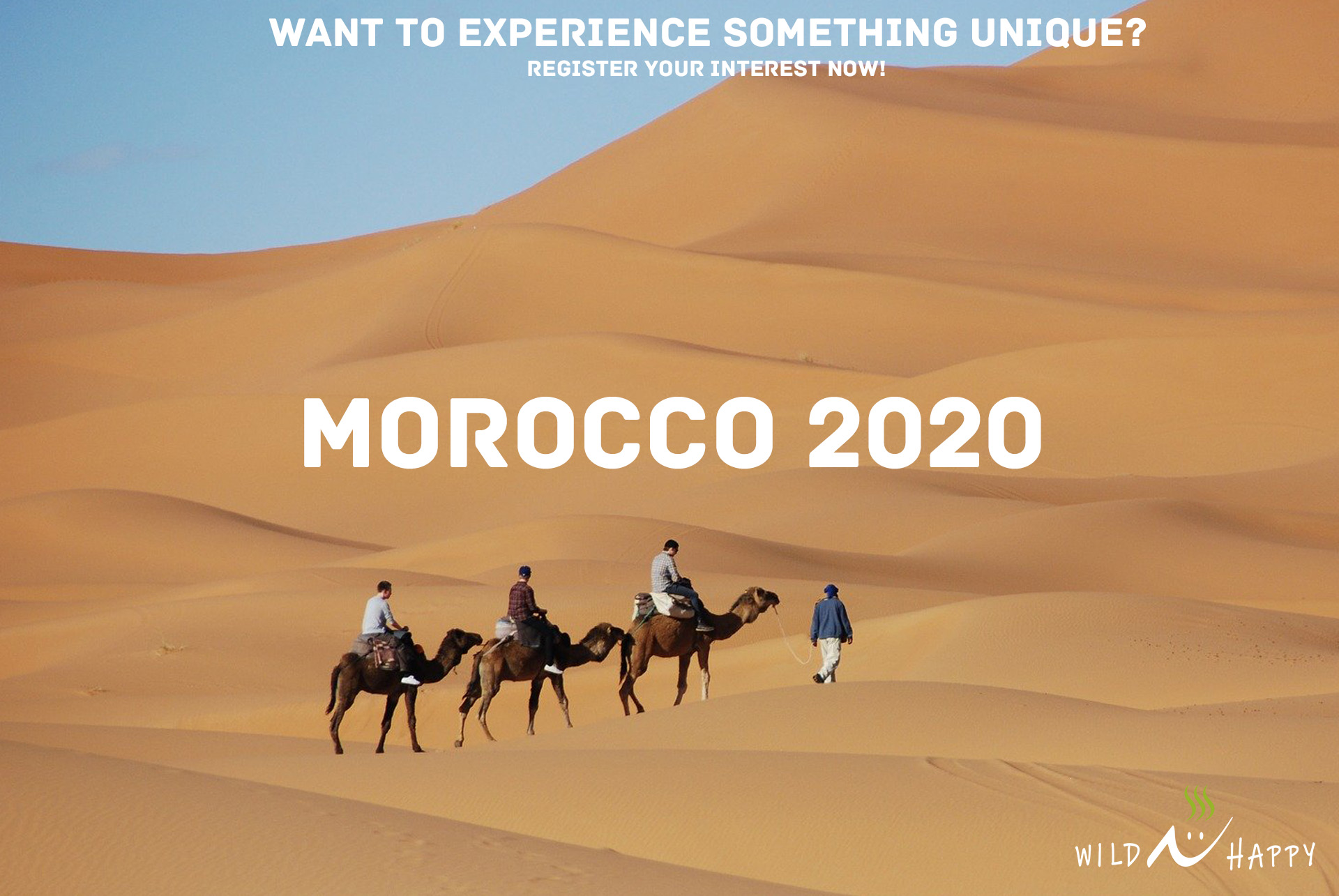 OVERVIEW OUR TOURS HIGHLIGHTS SPECIAL OFFERS DID YOU KNOW? HISTORY FAQ'S BROCHURE/BLOGS/VLOGS
FIND A TOUR
CALL US +353 (0)863890171
EMAIL US